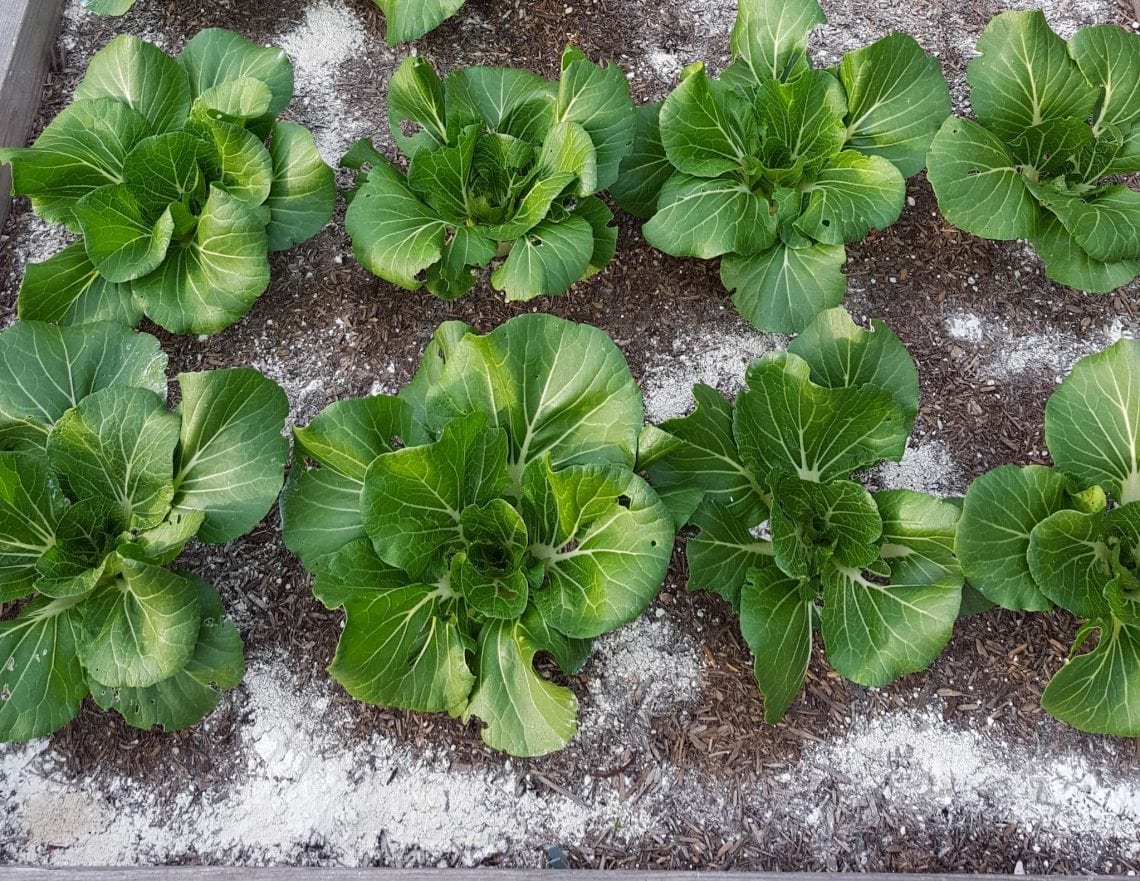 Have you heard about diatomaceous earth, or perhaps a recommendation to “use DE!” to solve a pest issue, but aren’t quite sure what it’s all about? You aren’t alone! DE is an excellent organic material to use in the garden (or around your homestead in general) but is often misunderstood.

Read along to learn all about DE and get answers to your frequently asked questions. This article will cover exactly what diatomaceous earth is, and how to use DE in your garden for organic pest control. We’ll explore what pest insects DE is effective against (or not), a few notes on safety and limitations, and how to apply it for the best results.

What is Diatomaceous Earth (DE)?

Diatomaceous Earth, known as “DE” for short, is a very fine, chalk-like white powder. It is made up of the fossilized remains of single-celled aquatic microorganisms called diatoms. In a nutshell, it is ancient phytoplankton. Diatomaceous earth is found naturally in sedimentary rock and mined to use in industrial products, swimming pool filters, as an organic insecticide, in pharmaceuticals, cosmetics, and even in food.

Like its many uses, diatomaceous earth comes in many grades. We always choose to use food-grade DE for our garden and chicken coop, which is the most gentle and safe form. Filter or industrial-grade DE has a significantly higher concentration of silica and is considered toxic to mammals.

How Does Diatomaceous Earth (DE) Work to Kill Insects?

The diatoms that make up DE have tiny rock-hard shells. Those shells are made of silica, which happens to be one of the hardest substances on earth. Fun fact: the Earth’s crust is 59 percent silica, and the main constituent of more than 95 percent of all known rocks.

To us humans, diatomaceous earth feels silky smooth! However, when the powder comes in contact with certain target pest insects, the microscopically sharp edges of silica in DE creates hundreds of abrasions on them. The tiny glass-like shards deteriorates their body’s protective outer layer, making them desiccate – or dry out, and die.

What Types of Pest Insects Does Diatomaceous Earth (DE) Kill?

Diatomaceous Earth is effective against any insect that has an exoskeleton. This includes fleas, mites, lice, ants, millipedes, earwigs, cockroaches, silverfish, bed bugs, crickets, cockroaches, centipedes, pill bugs, sow bugs, most beetles, fungus gnat larvae, and some grubs. While it doesn’t outright kill them, many snails and slugs do not like to crawl over DE (and it slows them down), so it can be used as a protective barrier or deterrent. We add a light dusting of DE under the wood shaving bedding in our chicken coop to prevent mites and lice.

Diatomaceous earth is not effective against caterpillars such as cabbage worms. Because of their thick gooey mucus layer that helps them travel safely through gritty soil, DE does not harm earthworms either. That means you can safely use a light dusting of DE in a worm compost bin that has become infested with mites, fungus gnats, or ants. Diatomaceous earth is considered relatively safe for bees – when it is applied correctly, in moderation, and not in direct contact with them.

Is DE Safe for Humans, or to Use Around Pets?

The good news is, DE is proven to be almost completely safe around humans, mammals, and wildlife! Chemically, DE is pure silicon dioxide (SiO2) and is non-toxic. In fact, diatomaceous earth is commonly used in the food and beverage industry for grain storage and beer or wine filters. It is often fed to dogs, cats, and other pets as a natural dewormer. I’ve even heard of people drinking DE to relieve constipation or improve the health of skin, hair and nails. (I don’t have any experience using it in those manners, so please do your own research there!)

The caveat here is inhalation exposure. It is not healthy for humans or animals to inhale fine diatomaceous earth dust. Long-term exposure is particularly dangerous, such as those working in the DE mining industry. Thus, heed caution when you’re applying DE to not create airborne clouds or breathe it in. To be on the safe side, you could choose to use a mask during applications, especially if you have respiratory issues. You also do not want to get it in your eyes.

How to Apply Diatomaceous Earth (DE) in the Garden

The easiest way to use diatomaceous earth in the garden is to simply sprinkle it on the surface of soil, around the base of plants, under potted plants, or other areas where pest insects are present. For example, we dust DE under and around the grow bags in our driveway garden that are prone to ant infestations. Or, in a ring around the base of plants that are being attacked by pill bugs. I typically dust it around with a small cup, scooping from the main bag. For a nice even application, use a flour sifter, garden duster, or fine mesh strainer.

You can also dust DE directly on infested plants themselves. However, that poses more risk to wandering bees. Bees are least present and active in the evening hours, so that is the best time for DE application. Avoid applying DE during windy conditions.

DE will harm any target insect that comes in contact with it, whether they’re directly dusted with it, or they walk over it later. That is…. as long as the DE is dry.

The main drawback with using diatomaceous earth is that when it gets wet, it’s rendered far less effective. Therefore, try to sprinkle it in areas that will remain dry for at least a few days, or plan to reapply it after watering or rain. In general, plan to reapply weekly as needed if the pest problem persists. When wet DE dries out once again, it may still work to kill insects – but it does have the tendency to clump. That is, unless it is wetted and evenly distributed in a spray form.

How to Create a Diatomaceous Earth Spray

For a broad and even application of diatomaceous earth, consider making a wet DE spray. Mixing DE with water makes it easier to treat a larger surface area. For instance, to coat an entire shrub, large tree trunk, or pathways and structures. Again, the DE won’t be effective until the water evaporates and the DE dries out. Then, the surface will be left with a fine coating of DE powder.

When it comes to a widespread infestation of aphids, mealybugs, spider mites or other soft-bodied insects on a plant, we prefer to use a DIY soap insect spray over DE.

And that is the scoop on DE!

In all, diatomaceous earth can be a useful, simple product to control pests in an organic garden. We always have a bag on hand. Yet there are many other organic pest control methods that we rely on too, and more readily than we reach for the DE – including preventative measures, companion planting, manual removal, and more. Please keep in mind that an organic garden is never a “perfect” insect-free one! That simply isn’t natural.

Thanks for tuning in! Please feel free to ask questions, and check out these related articles: 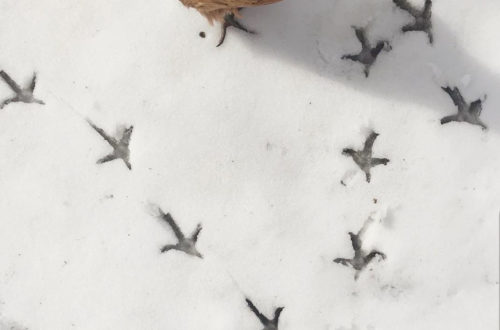 10 Tips on Caring for Chickens in Cold Winter Weather 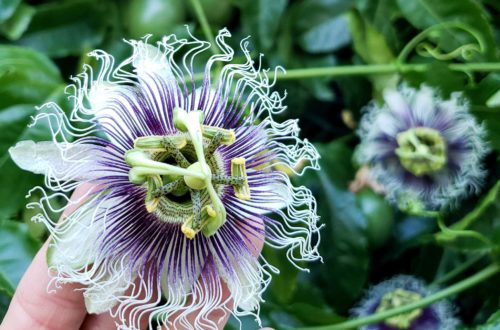 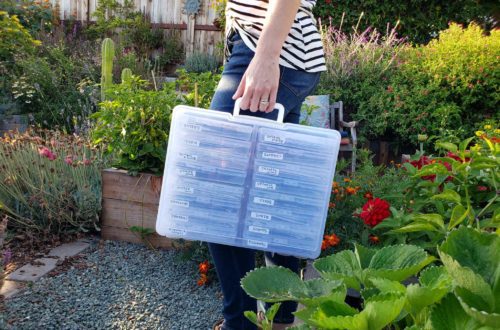 The Best Way to Organize & Store Your Garden Seed Packs